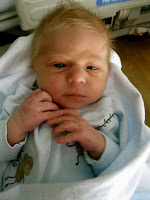 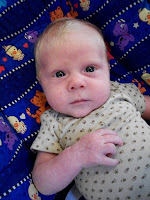 
I'm sure I'll be saying this again and again for the next 20 years, but where did the time go? How can Brody possibly be a MONTH old? Those first few days are still vividly in my mind and the present....but all the in-between weeks have melted together and flown by! Now I understand why even people who don't like to take photos all of a sudden take tons of pictures when they have kids--because they don't want to forget anything. Not only do I not want to forget anything, but I want Brody to be able to see what he did when and where he went before he could remember.

When he was born, he was a floppy little noodle, and now, as my sister-in-law Cora says, he is an al dente noodle. He's becoming less noodle-like every day. As soon as he discovers a new muscle, all he wants to do is practice using it. He now frequently gets annoyed when he's held in the convention cuddly rock-the-baby pose--instead he prefers any pose where he can hold his head up and stare at people. And he likes to exercise his legs too--we hold him up and he will do "mini-squats", kind of like Jazzercise for babies.

He's moved beyond the new-newborn stage of being able to fall asleep anytime anywhere with no effort. He still can fall asleep anywhere and pretty much at any time, but sometimes he needs a little help. I've noticed he's started to get fussy right before he goes to sleep instead of just effortlessly sleeping whenever he feels like it. That's actually been really convenient though, because now I feel like I know when he's tired and can seize the opportunity to put him to sleep and establish kind of a sleeping ritual. I swaddle him in a velcro swaddler (the most amazing baby "gear" EVER), and sing the Lord's Prayer to him. Ellis and I wanted to pick out a hymn for him too, to be his lullaby--we never really picked one, but I've kind of been doing Be Thou My Vision by default. We'll see what we end up with!

What a fab blog! This sounds like the beginning of a beautiful story. I love this and I love you!

Hi Hope! Congrats again on Brody. We had a going to sleep song for Miles too--the first verse of Psalm 128. Only problem was that he'd burst into tears anytime we sang it in church. That was pretty funny. Have fun with your little guy!

Hi you don't know me but I stumbled across your blog while reading through my friend (from church in WA and high school) Ali Tong's friend's list on her blog. I'm usually not a snooper but glad to come across your since it looks like you and your family live in VA Beach. My husband and I live on Hatteras Island in the OBX but I had my baby 3 months early on July 8 so am living at the Ronald McDonald house in Norfolk for while our baby is at the children's hospital here. Anyways, feel free to check out our much neglected blog. I will be updating more often with updates about our little 2 lb boy, Owen but haven't quite gotten to it yet.
All the best, Beth

Lovely, Hope! Those swaddlers worked amazingly for us too! ~LR