Since we are about to move....

....I thought I would finally get around to putting up a few pics of our place for the friends that have asked me. It was like 8 or 9 months ago when people were asking, so you/they probably do not even care any more, but here we go. :) And then in a month or so, I'll do it all over again.

First off, here is the dining room. 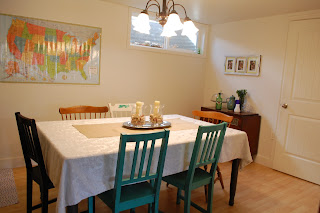 The chairs are a work in progress, obviously. We am actually sanding them and painting them a light seaglass blue/green this week (much lighter than the color on those two chairs). We'll see how they turn out--one of my third trimester goals is to finish all my unfinished projects that have been sitting around for the past YEAR.
You can't tell, but the table is also a WIP. Right now it is dark gray, but hopefully in the next couple weeks it will be white. 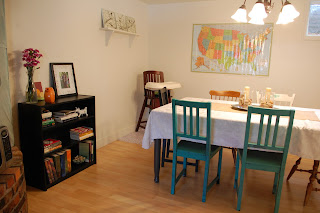 My sis-in-law observed about the map my worst fear about it--she was like, "your dining room looks like a homeschool schoolroom!!" Thanks, Rachel!! haha! I wondered if it might look that way! We really liked the idea of having a map with pins showing where we've been individually and together, and I got this one for free at the Hope Center. But it is a bit too laminated and colorful and classroom like, so I just gave it to an actual schoolteacher friend today. Hopefully it will enjoy its new home. 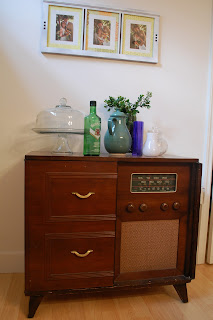 This is my vintage radio from my friend Lish--I'd loved it in her house for years, and am very excited that it is mine now!! 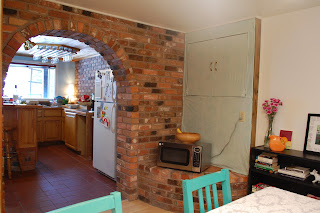 To show some flow, here is the entry into the kitchen from the dining room. 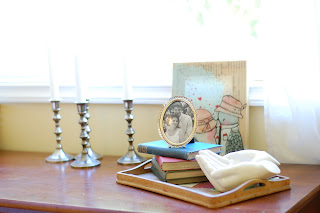 There are a lot of pics of the bedroom, because it has a lot of my favorite little spots. 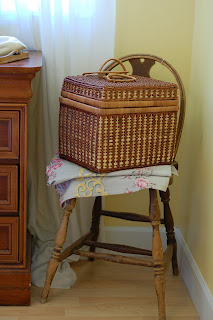 I have a problem with cheap antique chairs--this one was 5 bucks and the old curtain panel and picnic basket on it make it one of my favorite spots. 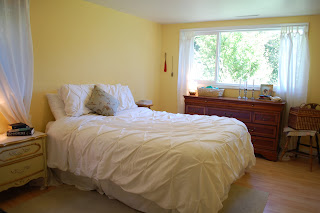 If only I had straightened the comforter and bedskirt. oh, well. :) We used a Target giftcard from one of Brody's baby showers to get the duvet set (don't tell him! :) ). It was so nice to update our old comforter--which I still love, and is in our guest room, but was just always too small for a queen bed. 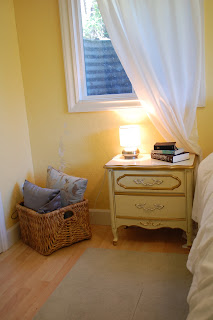 We snagged the bedside table from my sister's Goodwill pile last year, and it is in the queue for the whitewashing in the next couple weeks too. 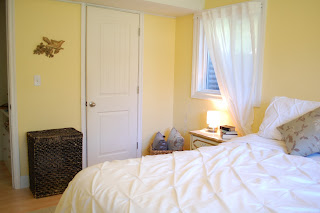 I know there have been a million pics of the bedroom, BUT I just love the bird on the wall, so I had to get a pic of that! 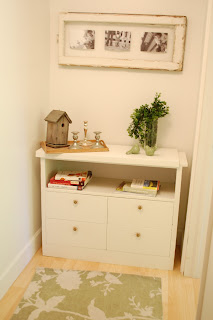 End of the hall. Might be my absolute fav spot in the house. 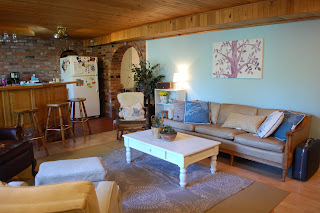 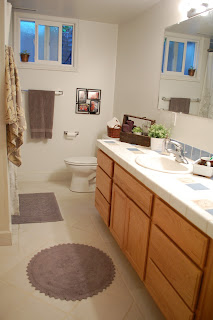 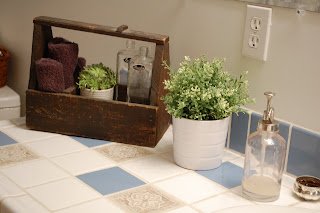 Succulent and fake plant--the only kinds of plants I'm having any luck with so far. 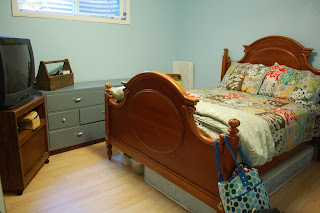 Guest room. After living with our TV in the middle of the living room for 3 years in VA Beach, we were sick of staring at it. So we put it on a rolling cart, and at least now it's not in the thick of things. I'd really love to get a cute media cabinet or something to hide it one of these days. We're definitely keeping our eyes peeled! 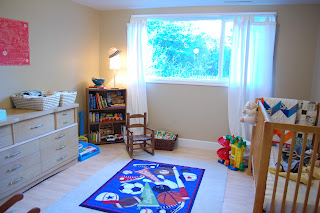 Brody's room--this room might need the most work of ANY. The rug is Brody's first decorating pick, which he fell in love with at Costco, and I thought it would be great for helping him play independently in his room. Like when I wanted him to play on it, I would roll it out, and then put it away at the end. As it turns out, 1) I never put it away, and 2) he's really good about playing independently anyway. We can give the rug credit, but I suspect I might be able to pick something more boring to a little kid and he would still like his toys. :) 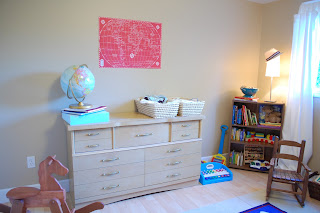 Love the map from the National Gallery of Scotland's bookstore. Another thing on the to-do list is Ellis building a frame for it. Also painting the dresser. 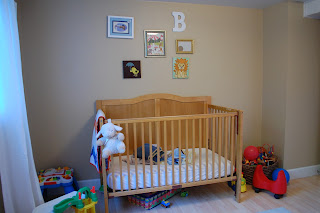 The most challenging thing on our sanding/painting list is Brody's crib. He still doesn't climb out of it, so we haven't tried moving him to a twin bed yet. We'll probably get around to it sometime between when we move at the end of August and when the baby comes the end of October. We'll see--one of these days! I started a gallery wall over Brody's bed one day, but never finished it. Couldn't decide what to put in the frames. Indecision is the worst!!

Anyway, so there's a little peek of what things look like, and what we love and what we're wanting to do!