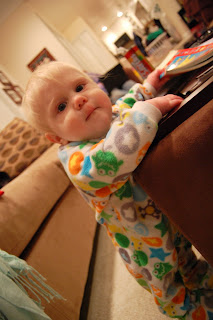 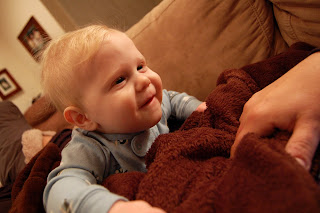 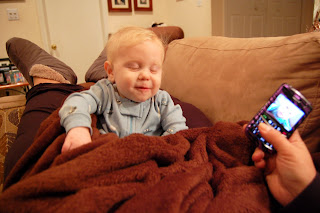 So I've been terrible at updating my fam about Brody here. I know you're going to see him in just a few days (SO EXCITED!!!), but here's a little sneak peek of what he's been up to.

5 months--he became a champion kisser. Unlike his daddy, he's not scared of a little PDA. Brody kisses ALL THE TIME. Due to my lazy nail-cutting habits, though, his kisses can be pretty painful events. He grabs generous handfuls of face flesh and pulls your face toward him in a pinching fashion and then drools copiously. I'm sure you can't wait to experience it. (It's totally worth the pain, though--we LOVE Brody kisses!)

Thanksgiving weekend was a big one for him--he discovered his ears and army crawled for the first time. He's still not crawling in the classic sense, but he's gotten pretty proficient at the worm--it gets him where he wants to go. It's really funny!

6 months--we changed our minds on who we thought his personality took after. He had been stoic and chill and quiet (like Daddy) all along, and then 6 months hit and he started jabbering all day long, smiling, and demanding attention (like Mommy).

He's loving echoing back sounds at different pitches, and doing the worm, and standing--ALL THE TIME. I think I need to get him one of those standing toys so he can stand and play with the toys on top. Right now we're doing that with the couch and coffee table, but they're a little tall.

Also, THANKFULLY he has his dad's sense of rhythm. Whenever he listens to music, he bobs and kicks his feet to the beat. I'm hopeful this means he'll be able to dance like Ellis and not like me.

We gave him his first solid last weekend, just a bit of egg yolk (as recommended by the book Nourishing Traditions--check it out!!). He wasn't too impressed. We haven't given him anymore, not on purpose, but just cause I keep forgetting. However, he LOVES glasses and drinking. He loves to drink water, and he won't say no to the occasional sip of beer or scotch (does that make us bad?).

Anyway, here are a few videos for you to enjoy!


Brody bouncing in his Christmas jumperoo

Brody trying out egg
(pardon the pantlessness)
Posted by Hope at 1:19 PM

BABY KISSES ARE THE BEST! oh my gosh. And I know ALL about the nail-cutting laziness...everyone is always complaining! haha I never even thought to try egg with Ben...although he'll eat pretty much every we give him, with the exception of bananas. He HATES bananas! Although, both of his parents do as well, so I can't say I'm surprised. I can't wait to meet your little guy in August! And I hope he still has blue eyes then, too :)

I can't wait for one of those painful kisses - so cute!