I'm pretty casual about my hobbies--basically I just love to see something pretty come out of something that was once ugly or mundane. But it's always been a back-burner goal to eventually be able to make a little money on the side doing what's already fun! So I was giddy to get a paid commission--a Virginia Tech afghan for an old coworker to give his wife as an anniversary gift! The time frame was a bit of a crunch for my usual laid-back, knit-to-relax pace--by the time I'd ordered yarn (then canceled the order because it wasn't going to be in by the time we went to SC for Christmas, and finally ending up going to AC Moore), I only had a month to make it.

Now I know there are plenty of people who can do a blanket in a week, but either amazing dexterity is something you're born with, and I'm not, or it's something that has to be developed and earned, and I haven't yet. So a month was plenty of a time crunch for me! 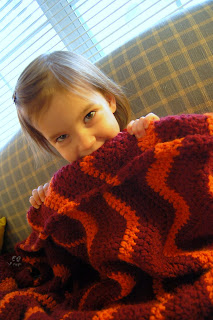 Brody was asleep when it was time for pics, so my other favorite model stepped up to the plate for me! 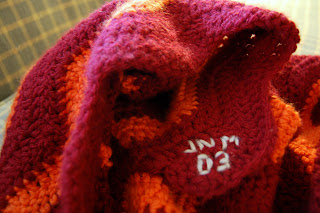 He asked me to do some embroidery in the corners of his kids names and birthdates. I was totally winging it and didn't want the back to get too messy, so I just shortened it to initials plus their birthyear. 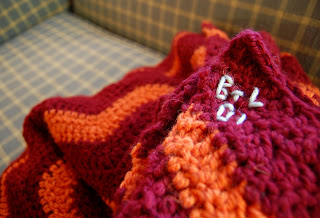 And a little B+L with their anniversary year. 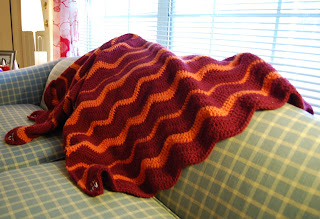 The pattern I used is Attic24's Neat Ripple Pattern, which is the same one I used for Brody's yellow blanket, which I never took an official pic of, but you can see here. It's a super-great flowing pattern that's easy to pick up when watching a movie or chatting or on long car trips...nice and mindless!
Posted by Hope at 9:58 AM

This would have taken me 1,323 years to knit. You are a rockstar.

Awesome job! And so cool about a paying job.