One of the craziest things about marriage is seeing how you rub off on each other. It's not always in the ways you expect or hope--like we were both hoping that Ellis's punctuality would rub off on me. But instead my lateness has dragged us both down so that, much to Ellis' chagrin, people that know us now mistaken identify the Littlejohn lateness as an Eifert trait.

But it works both ways, because Ellis always tells people that he was born an old man--he loves staying home every night and going to bed at 10. Whereas I've always been the girl that was going places with people every day and every night and if I was in bed by 10, my parents knew I was sick. But now, just like my old man husband, my favorite way to spend an evening is hanging out on the couch with these guys. 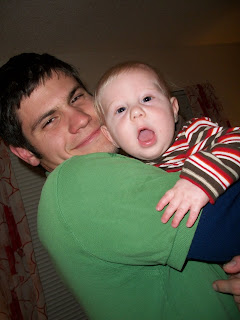 What more exciting weekend plans could you ask for than spending it relaxing with your two favorite people? Maybe that makes me an old fogey at heart like my hubby. But in that case, maybe Ellis had it right all along and being old is F.U.N! 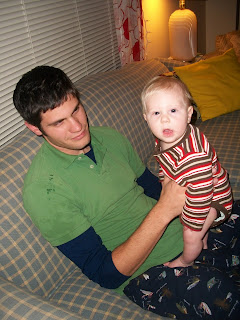 Annndd...my son never wears pants. We never wore shoes as kids (what kids do?), but I think Brody is taking it to the next level. Some days he doesn't even wear a shirt. Just a diaper. But what's cuter than a baby's chubby tummy in a diaper? Especially a cute cloth diaper--they're totally outfits on their own! ;)
Posted by Hope at 6:54 PM

I loved these sweet pictures. I haven't seen you in so long. Brody is looking so cute and big!

I know! we are so sorry we missed you at church this morning. We are out of town in DC. We're coming back early tomorrow AM. I'm available for tea whenever is good for you! Just let me know! <3