I figured since today was the last day of fall (well, I guess officially December 19 or something is, but nobody wants to think about fall after November) that I'd better do one last fallish post.

Here are our pumpkins with the thickest rinds EVER--it took me like 2 hours to hack that tree into the pumpkin enough so that light just barely shone through. It was super fun though! We had a big pumpkin carving party with tons of dessert and apple cider. We had this party a week before Halloween, and it was so warm out that 4 days later the pumpkins were completely rotten. 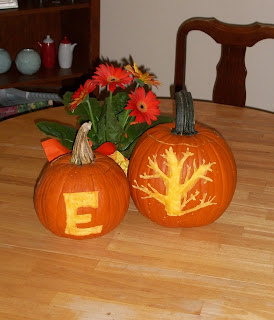 One of our friends left his pumpkin with us, and it lasted a bit better because it was carved all the way through so I guess it could breathe better. So we tried to salvage it for the trick-or-treaters, but Ellis was periodically wiping the seeping goop off the front porch table! :)

And then a first for this fall was a wreath! Nothing fancy, just some simple leaves and berries, but it was fun to actually do something! Plus honestly I like things simple and not over-embellished. 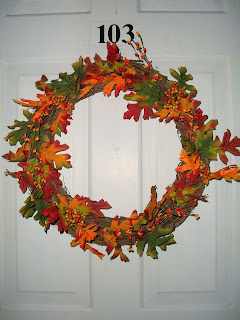 Originally I wanted to do a berry wreath, but all the berry sprigs I found were shaped weird, so I decided to try the leaves. I saw some nice berry stems at A.C. Moore the other day, so I'm hoping to do a berry wreath for Christmas--right now we've got Christmas inside the house and fall outside still. Oh, well, one thing at a time. :)

thanks, Mom! now there's an evergreen one up instead and while making it I kept thinking of you and your advent wreath with the evergreens and the plaid ribbon! love you!